Depiction of the H.M.S. Agamemnon, running cable in the Atlantic. Artist: Robert Dudley, 1866

A century and a half ago, the crew of the HMS Agamemnon pulled off what many thought was impossible. After enduring a year of storms and sickness, they finished installing the first transatlantic telegraph cable between the British Isles and North America. (Just imagine the coils of cable that filled the ship—1250 tons worth.) Queen Victoria sent the first message though the line in 1858. Unfortunately, the cable’s insulation failed several days later, and it never worked again—a heartbreaking, bitter end to an immense undertaking. The project, though viewed as a failure at the time, helped create an enduring vision of a more connected world.

Today, high capacity fiber optic cables crisscross oceans and continents, and satellites and wireless services reach the most remote parts of the globe. These networks, along with the most recent developments that have redefined how information is represented and stored (think mobile, social, cloud) have become powerful forces of change.

It’s in this context that customer interaction is changing so rapidly. And a new generation of pioneers are reinventing customer experience. I’d like for you to meet a few of them (shown here in San Diego at the Customer Response Summit, an event produced by Execs in the Know).

The first thing you notice when you enter the contact center led by GM’s Melody Blumenschein is how quiet it is. Soft, rhythmic typing is only occasionally punctuated by a huddled conversation. Her group interacts through social channels—engaging with customers through some 120 automotive enthusiast forums and feedback forums as well as  several dozen 15 twitter handles. “We need to be where our customers are,” as one of her agents put it.

Melody began her career with GM North America Product Planning in 2001, and later moved into the Customer Care and Aftersales group where she held a number of strategic planning roles. Two years ago, successes there earned her an intriguing offer: would she manage the newly formed Social Media Care team, which was to be part of GM’s Customer Experience team? She decided to take the leap.

Today, she credits the support of GM’s leadership, great partners across the organization, and her team in helping her shape an innovative new model for reaching, interacting with, and serving customers. The impact of her group goes far beyond customers they directly serve; intelligence gained in interactions is shared across functions in an ongoing push to improve quality and communication. “I’m not a social media guru by trade,” she says, but “I’m incredibly passionate about proactively helping customers.”

Tom Weiland’s journey at Amazon, from temporary customer service associate in 1997 to heading Amazon’s global customer service operations today, is an inspiration to anyone wondering how far a career in customer service can take them. Tom was promoted soon after starting with the company, and has since had roles in risk management, software development, integrating newly acquired retailers in the U.K. and Germany (he lived in Europe for a year), and serving as director of North American customer service.

Under Tom’s leadership, Amazon continues to reinvent customer service, with initiatives such as Mayday support on the Kindle Fire HDX (enabled through Web-RTC and Amazon’s home-built technologies), and a lean-manufacturing-inspired “Andon cord” process that enables any service rep to immediately remove a product with suspected quality or distribution problems from the Amazon site, until fixed.

When Tom reflects on the beginnings of his journey, you get the sense that innovation and service are part of his DNA. “I certainly had no idea just how successful the company would be, but I was attracted to how it was bringing together technology and retail in a brand new, inventive way. And the customer obsession was palpable and permeated everything.”

How would you like to head workforce management for a company that many economists look to as a leading indicator in their economic forecasts? Not for the faint of heart, but it suits Don Bland—Managing Director of Vendor, Workforce Management and Quality Assurance for FedEx—just fine.

Don began his career with FedEx in 1979, as a part-time customer service rep. “At the time, I was #42 in seniority within the call center and I recall thinking that I’d never get a decent shift.” But he learned firsthand the critical role that “world class service” had in growing a new industry and building one of today’s most respected brands. His journey has included a variety of roles in service planning, including supporting the rollout of 16 customer service centers.

In 1995, Don was chosen by executive management to lead a particularly impactful reengineering project—one that would help set the direction of FedEx service for years to follow. It encompassed nine key initiatives that included the implementation of workforce management, centralized scheduling, FedEx’s first self-service IVR, standardized KPI’s, and robust employee coaching processes. The success of this project made him a natural fit for the role he has now.

“My career has been an amazing journey,” he says, reflecting on the past 35 years. “I am fortunate to have had the opportunity to work with some of the smartest and most customer-focused people in the business, in building one of the most admired customer service organizations in the world!”

Janet Bailey was still in high school when she got her first job—working in a call center. It later evolved into a part-time arrangement that allowed her to work while she attended college. She recalls huge phones, multiple lines, and data entry on pen and paper. “When the phone rang, a line would blink and one of us would grab it.” She took calls for everything from the Olympic Seed Club (which was a way for kids to earn money), to Williams-Sonoma, and Fredericks of Hollywood. “It was quite an experience for a 16-year old!”

Fast forward to today, Janet is Director of Customer Service for Starbucks—a global operation that puts her on the forefront of social, mobile, contact center and all things customer contact experience. That for one of the world’s most recognized brands—now at 20,000 stores in 60 countries, generating an annual $15 billion.

Janet’s journey has contributed enormously to the wisdom and authenticity she brings to her team. After her first job in the call center, her career evolved through many roles both inside and outside of contact centers: service in a Bank of America branch, time out to have a family, a position responsible for outreach to donors of a university foundation, roles in manufacturing and customer service for HP, a season where she focused on recovering from an injury, and back to a contact center where she became operations manager.

At Starbucks, her first responsibility was as business operations manager for the customer contact center. In this role, she oversaw the nuts and bolts of forecasting, scheduling, knowledge management, training, quality, and project management. A subsequent stint creating the long term strategy for Starbucks customer contacts served as segue to her current position as director of customer service. Ask her what her role is, and her down-to-earth clarity of focus is quickly evident: “My job is to make it easy to be a customer, and to meet them where they want to be met.”

As different as these leaders (and the organizations they serve) are, they have much in common. They are quick to credit success to their teams, and certainly aren’t looking for the spotlight; it’s apparent how effective they are in bringing out the best in those around them. They’re down to earth and approachable, even as they wield enormous influence on the direction and priorities of their organizations. Like most who head customer service operations, they got there as much by serendipity as a planned career path; they recognized opportunities that came their way, produced results, and now have a wealth of diverse experiences they bring to their roles. And they are pioneers—they’re exploring uncharted waters and helping to invent the future of customer experience.

Developments in customer service have come in progressive waves over the years—much like sets surfers learn to read. The next—encompassing mobile, social, and other trends evolving by the day—will be the most powerful yet. This is an important time, an exciting time, for professionals in the customer service space. And it’s inspiring to see the work that Mel, Tom, Don, and Janet are doing to help lead the way.

Postscript: Many thanks to Melody, Tom, Don and Janet for being willing to share their stories (and thank you to their PR Departments for allowing them to be told!). The photo was taken in San Diego at the Customer Response Summit, an event produced by Execs in the Know that brings senior level customer service professionals together. Thanks to CEO Chad McDaniel and the entire Execs in the Know team for making this collaboration possible.

Author bio: Brad Cleveland was a founding partner in, and former longtime CEO of, the International Customer Management Institute (ICMI), where he currently serves as Senior Advisor. An in-demand speaker and consultant, Brad has worked across 45 states and in over 60 countries, for clients such as American Express, Apple, USAA, Coca-Cola and HP. He can be reached through www.bradcleveland.com.

Note: Execs in the Know and ICMI have partnered to deliver customer experience training (courses are presented by Brad). The next will be held at the upcoming Customer Response Summit in Toronto, June 16. 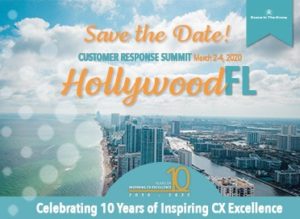