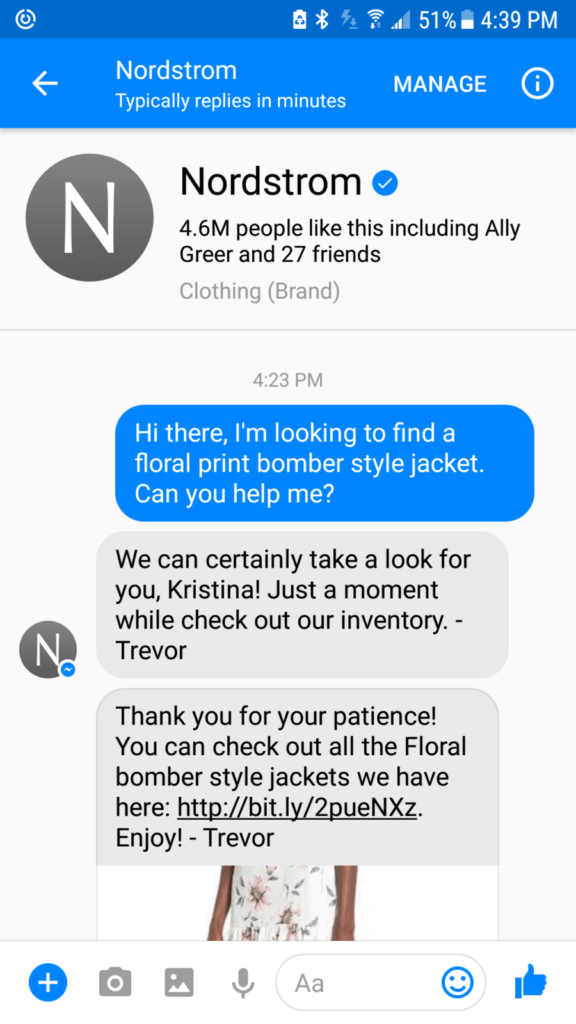 The following is a guest blog by Krysta Gahagen, Product Marketing Manager at Sparkcentral. For more information on Sparkcentral, visit their website.

Many brands ask us about the differences between using live chat versus digital messaging (ie. Messenger, WeChat, in-app/in-web messaging, etc.) for customer support. That’s right, chat and messaging are NOT the same. Although chat was loved by brands in the past, we believe its final days, as it currently exists, are near. To explain why it’s important to first clearly distinguish how the two are different.

Take a look at the examples below to see the difference between a messaging interaction versus that of a chat interaction. 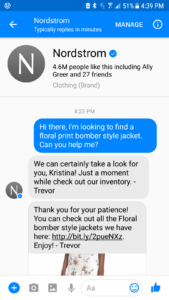 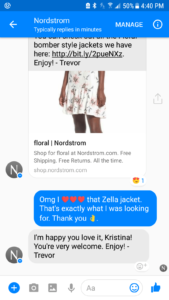 The example above is one of messaging.

In this interaction, I had reached out to one of my favorite brands, Nordstrom, to get some help finding a jacket.  Here is what was great about using messaging for customer support:

– This conversation was asynchronous, meaning the agent and I could communicate without being available at the same time.

– It was extremely convenient – I received a push notification on my phone’s home screen when the agent responded (rather than staring at my phone waiting for a response).

– It was contextual, so if I ever forgot which jacket I was looking at, I could just open up the app and go directly to the link the agent had sent me. Also, if I ever reached out again, the agent would know exactly what that previous interaction looked like.

– It felt personal and human. I was able to share just how genuinely excited I was by simply adding emoji to the message. With messaging, agents and customers can share and express emotions via emoji and gifs.

My experience with chat was very different… 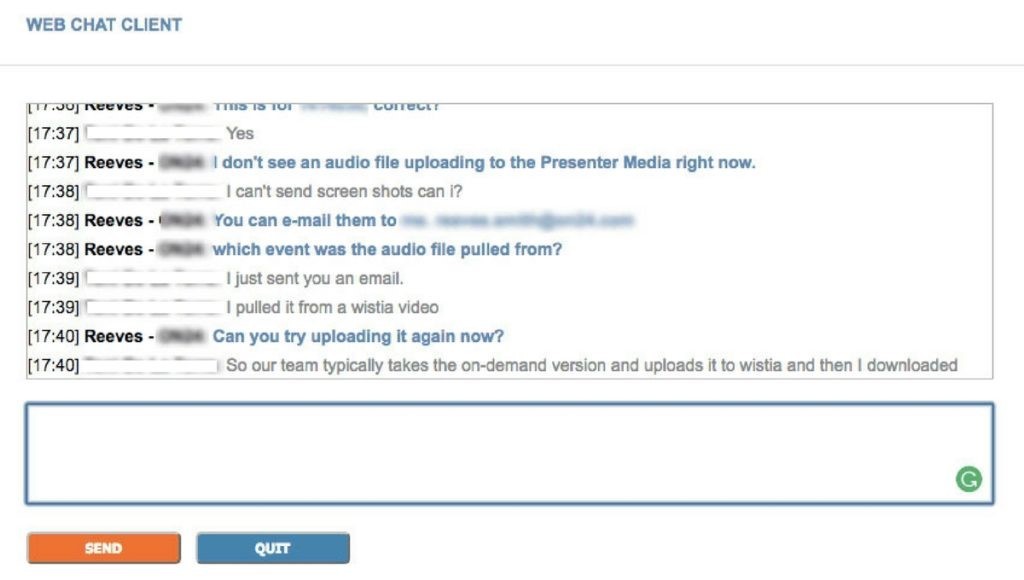 In the chat interaction above, I needed help from customer support regarding a slightly more complex issue than my first example. This conversation was also much more frustrating for me due to the limitations in chat. Let’s break those down:

– The conversation was synchronous (as are all chat interactions), so I had to be actively available to receive the agent’s response and vice versa.

– It was session-based – so once I closed out of the chat, the entire conversation thread was lost. I was essentially held hostage in the chat and if I were to leave, I’d have to start all over again (which, of course, happened).

– Since chat lacks context, I had to re-explain my problem to a new agent when I reached back out for more help.

– When I had trouble explaining my issues and wanted to share a screenshot of my problem, I was deflected to email (since chat is text-based).

– There was no use of emojis or gifs and the entire interaction felt impersonal and lacked the human element.

If the examples above don’t convince you that messaging is a preferable way to interact with a company, let’s look at the numbers. According to a research study by Mckinsey, a single chat interaction costs a company between 3 to 5 dollars per interaction. A messaging communication is less than $1, which is up to 1/5th the cost. 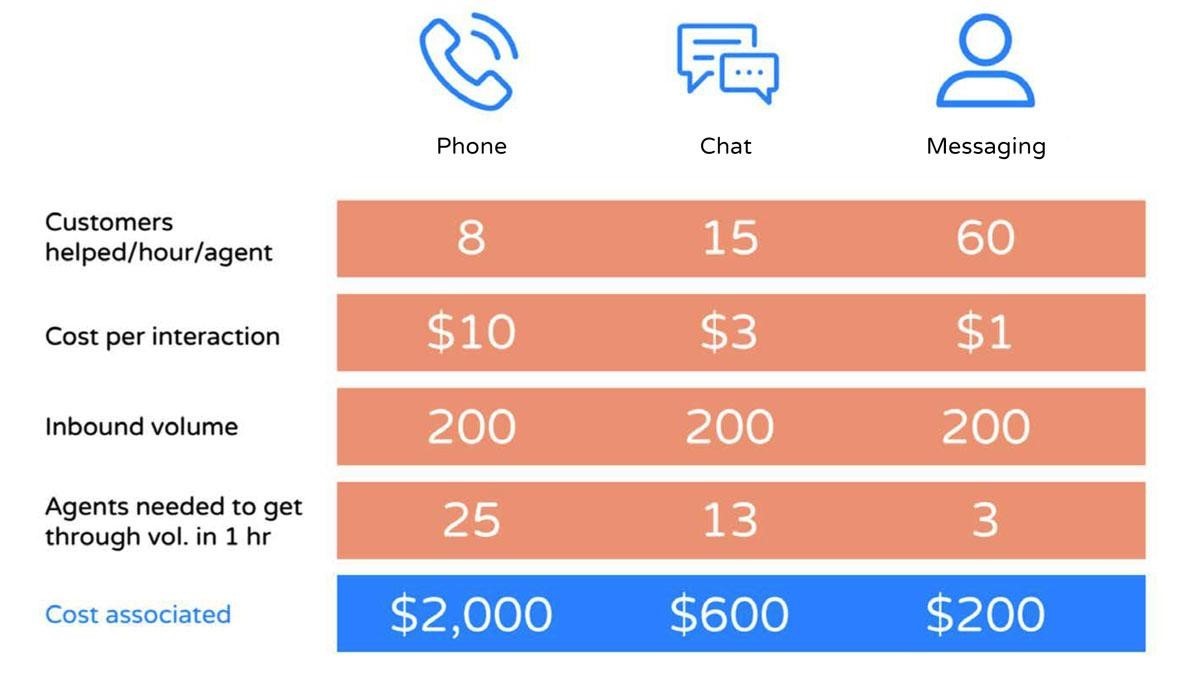 Not only are messaging interactions less expensive for brands than live chat interactions, but with the proper technology in place, agents can handle as many as ten messaging conversations at one time. That’s 5x what most contact centers report for concurrent conversation handling on chat.

Regardless of the cost savings, here’s a pretty powerful fact: 9 out of 10 customers actually prefer to message a business. Why? Because messaging is a HUGE part of our daily lives. Here’s another fact: 1.4 billion people around the world send over 50 billion messages each day to communicate with one another. In addition, WhatsApp and Messenger have around 1 billion monthly active users each and WeChat around 900 million. Messaging as a conversation and interaction interface has fundamentally shifted how we communicate with one another, and it is about to shift how people communicate with your company.

Interested in finding out more about the topics in this blog or Sparkcentral? Sparkcentral is one of the subject matter experts that will be sharing their insights and expertise at Customer Response Summit Charleston, March 12-14, 2018. CR Summit Charleston will feature speakers from Neiman Marcus, Indeed, Capital One, T-Mobile, and more. For more information about our leading event for CX professionals, visit our event website. 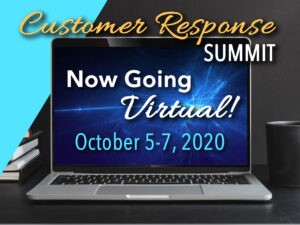