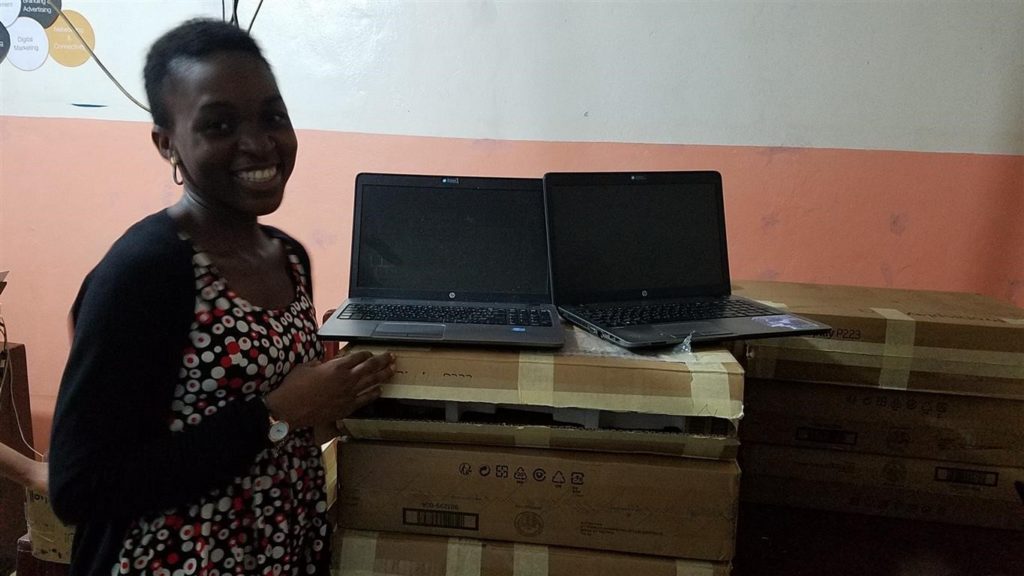 – Google plans to give $1 billion in grants and 1 million employee volunteer hours in the next five years.

– IBM’s travel program sends their best employees to developing nations to use their talents on pro-bono assignments.

Because of their scale, these corporate programs have a deep and obvious impact on the planet. But organizations can have a staggering effect on a smaller scale, too—just one person and 20 computers were enough to transform the future of a town in Africa.

The Power of Individuals—And Community

A chance meeting through a mutual friend introduced Execs In The Know co-founders Chad and Susan McDaniel to Yembe Nfor, a young man from Cameroon with a vision for bringing technology to his country. His story inspired them so much, they asked him to share his message with their children.

He spent hours with the family, detailing his vision for a space where people in his city could access the internet. The kids were moved to help in any way they could, as were their parents. Chad and Susan turned to the EITK community to see if they could obtain the resources he needed, gathering support by sharing Yembe’s tireless individual endeavors.

Yembe has always had high expectations for himself. “My name… means ‘Behold Wonders,’ and one of the biggest goals of my life has been finding the wonders my grandparents and their grandparents before them were looking at when they thought that name up,” he said.

His home, Cameroon, is one of the most politically and economically stable Sub-Saharan African countries. However, it lags behind the developed world in many respects—Yembe was 19 years old the first time he stepped into an elevator. Economic development in Cameroon is slow, in part because of a lack of access to technology. Just 18% of its 24 million citizens have access to the internet, and even fewer own a personal computer.

Without technological resources, young people in Yembe’s country—and more than 60% of Cameroonians are under the age of 25—struggle to get the education they need to provide skilled labor to employers and better their lives. Without that education, without those resources, Cameroon’s ability to keep up with other leading nations of the world community is inhibited.

Yembe has worked very hard to change the trajectory of Cameroon’s future, and his efforts have made an impact. In 2017, he was awarded a Mandela Washington Fellowship, which brings promising leaders in Sub-Saharan Africa to the US to study at a college or university. After their education ends, Fellows like Yembe return to their home countries and receive continued professional development support.

While in the US, he gave presentations on the challenges people in his country face. In these presentations, he posed this question: what if people in Africa had the same opportunities as people in the developed world? He asked listeners to “imagine providing a space where young people with a passion can gain access to a computer and internet through which they can learn, develop skills, and use them to better their community.”

His vision for these Digital Spaces inspired Chad and Susan, and they started exploring the EITK community for a corporate partner that could bring his ideas to life. They shared his story with Aileen Allkins, Microsoft Corporate Vice President, Customer Service & Support. Aileen reached out to her network and contacted Tek Experts, which uses an expert workforce to provide business and IT outsourcing services. The company pledged their support: Tek Experts would donate 20 laptops to Yembe’s Digital Spaces project. In addition, Susan would bring her expertise to Digital Spaces as a board member.

The Difference One Person’s Determination Can Make

Though Yembe’s mission was one big step closer to being fulfilled, the reality of Cameroon’s political landscape soon intruded. First, the government turned off the internet for several weeks because of political unrest, delaying important conversations. He created a non-profit, then had to re-submit the paperwork.

After working through those obstacles, the laptops were shipped and arrived in Cameroon. One last stumbling block appeared: custom duties of $200 per laptop had to be paid before the computers would be released. After more than a week of negotiating, Yembe brought the duties down to $1,000 and finally Digital Spaces had its first pieces of equipment.

The struggle to get just 20 computers illustrates the barriers he faces in his quest to provide access. Yet he remains dedicated to his goals, which extend far beyond Cameroon’s borders. His vision for Africans is ambitious, but he has created a roadmap for getting there.

“Now it’s become clear what those wonders my grandparents were looking at are,” Yembe said. “They’re the possibilities that we can unlock, if we give digital opportunities to our young people.”

Corporations Can Change The World, One Project at a Time

The most successful CSR programs are inextricably linked to organizations’ core values. “Tek Experts built its business on offering exceptional career and development opportunities to our employees around the world and when we heard Yembe’s story, we really wanted to help,” Raymond Murray, Global Marketing Director, said.

This story proves our networks are a vital resource for our social responsibility efforts. From Chad and Susan, the story traveled to Aileen and then on to Raymond. At every step of the way, Yembe’s inspiring story moved people to action.

“Yembe’s tireless devotion to providing people with opportunities to better themselves, to realize their potential and to achieve more, is what we’re all about. So when EITK/Microsoft came to us to see if we could help we jumped at the chance,” Raymond said. “It’s people like Yembe that can really make a difference in the world and we’re proud that we could do something, no matter how small, to be part of his amazing endeavor.”

From assisting individuals like Yembe with their goals, to multi-million dollar charity projects, corporations can do good in many ways, large and small. The best organizations will work on unlocking possibilities, not chasing profits.

How You Can Help

If Yembe’s story galvanized you into action, reach out to us at info@execsintheknow.com. We’d love to hear the stories that inspire you—and leverage our community to help—or discuss how you can give to the Digital Spaces project.